Regarding the claims of a mass slaughter by a radical Islamist group of soldiers in Iraq it doesn’t take long to determine its nature. The killing of such a vast number of men is a major issue, and there would, therefore, be a vast trail of evidence. The number alone, 1700, is indicative of a Illuminati-style Zionist scam.

“1700″ men – not just any men but actual soldiers, that is – at “seven” sites? This alone should alert anyone with shrewdness of thought of the source of this information, which is the Satan-worshipping, numerology-based Zionist cabal.

Too, they had to come up with the seven locations lie to account for the fact that in the imagery there are barely one hundred people, let alone 1700.

The only thing that is filthy about this is that it is merely one more filthy Zionist lie – a distraction of sorts. Perhaps the plot is far more serious. The claim is that all of Northern Iraq, particularly and precisely Northwest Iraq, is lost. All of it? Really? It’s all in the hands of the purported terror group, ISIS, also known by the initials ISIL?

It is the north-western part of Iraq which borders Syria. This is a plot by the Zionists to justify massive US military intervention into the area. it is being used as the means to mobilize international support for such intervention, which would include the placement of great covert forces, including the Israeli Mossad.

Regardless, this hoax merely demonstrates the degree of control the Zionists have within the various nations of the world, including Islamic ones. Does anyone not recall the Iraqi incubator baby hoax, which was then used to substantiate the mass slaughter of innocents as well as the mass invasion by US Forces of Saudi Arabia, Kuwait, and more?

The Twitter feed from which the photos arose is now gone. The region of northern Iraq or northwestern Iraq is not under this entity’s control. Incredibly, it is now claimed that the psyops entity has “captured Mosul and Tikrit” and according to the Zionist mouthpiece, the DailyMail, is now marching onwards to Baghdad. Really? Is this Mossad-orchestrated entity going to take on the massive, sprawling US military compounds in the city? Militants from the al-Qaeda-inspired Islamic State of Iraq and Syria (ISIS) with truckloads of captured Iraqi soldiers after taking over a base in Tikrit, Iraq. Source: AP

If they are al-Qaeda inspired, then, they are Mossad-inspired. It just so happens for the photo shoot that there is a man with the black and white flag standing on the edge of the street for the photo-shoot, adding to the drama of it all.

According to the Zionistic cabal the Mossad-inspired (al-Qaeda) group “has seized much of northern Iraq, can no longer be accessed.” Once again, this part of Iraq would amount to a necessary platform for the re-igniting of the Zionist proxy war against both Syria and the Hezbollah.

It is an Israeli false flag front. Conquering Syria and the Hezbollah through proxy militias is no easy prospect and there is no proof that the Zionists have given in on their plot: Another Twitter picture shows ISIS militants removing part of the soil barrier on the Iraq-Syria borders and moving through it as they consolidate the mini-state they have carved out between the neighbouring countries (Credit: the DailyMail).

Therefore, clearly, the claim for such a mass slaughter of US-endorsed and -trained Iraqi soldiers is a false flag act orchestrated by the Zionists.

This is supported by the fact that there is heavy support for this hoax – that is for calling it real – by the Zionist-controlled US government: A handout picture released by the US Navy shows aircraft carrier USS George H.W. Bush sailing in the Arabian Sea. The carrier has been redeployed to the Persian Gulf to provide air support to beleaguered Iraqi forces.. ‘We’re coming. We’ll bomb you and shoot missiles at you, blowing you up into pieces, while we rescue you.’

As always, it’s big, bad never-cared-about-dead-Iraqis-before America to the rescue, sending not only aircraft carriers but also destroyers fitting with guided missiles. It’s all aimed not at the ISIS but, rather, at the sovereign nation of Syria and also, surely, the Hezbollah and Islaamic Iran.

The mass slaughter of such ‘soldiers’ is a Zionist hoax and plot – make no mistake about it.

A real mass murder – the evidence?

Just showing a bunch of people jammed up in the beds of trucks and other vehicles is not proof of a mass slaughter. Who in the world would do such preparatory filming, taking the time to document it all, that is unless it was a set-up and a scam? There are no armed guards directly associated with this well-packed truck. In fact, the men with the guns are at a considerable distance from it. 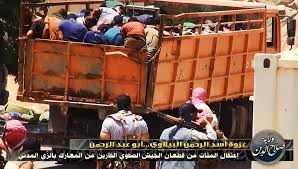 Now, how about this for real fright. One of the main crisis actors, the man leading the pack – the one in the creamy-yellow shirt, takes the time to stare directly into the lens. Iraqi soldiers are lined up by ISIS militants. Source: AP

Of course the source is the arch-Zionist Rothschild AP. Even so, how are these soldiers? These are just regular people who have been coordinated as actors for this hoax. There is no evidence of any degree that they are military men.

They’ve supposedly conquered the local military and police: without the slightest bit or resistance. Then, why don’t they haul them away in the official vehicles? Regardless, we do not find it believable, here, that with all the variables of taking such a mass of ‘military’ men under control that this Israeli-supported entity would take the time to make a documentary out of it. They are forced to walk in a chain at gunpoint. Source: AP

NOTE: As is typical in Zionist hoaxes the shoes have been stripped off.

Regarding this purportedly blood-stained image, we have not been able to find it.

The men are then loaded into utes. Source: AP ISIS capture dozens of soldiers and take them to death sites. Source: AP The terrified men huddle in the back of a truck. Source: AFP

Note: Like AP, France’s AFP is an entirely Zionist-controlled entity.

They have been all trained as a part of this crisis actor-based scam to all hunker down, bent over and submitting; it’s all a part of the D-grade movie drama.

Yet, the Zionists and their Iraqi-Tikrit-based collaborators will be taken at their word. Here, they claim that these poor soldiers, who gave up nary a fight, were rendered defenseless. Their hands were bound behind their backs: Does anyone see any string or rope? These are purportedly soldiers. They are trained to use not only their guns but also their hands – directly by the US military.

They lie. The hands are absolutely unbound. These are crisis actors paid for their roles, not actual conscripts. Then, if they are conscripts, they, too are hoaxers.

The zoomed in imagery proves that the hands are free. This confirms the hoax. There is no reason to fake it as if the hands are found. Captors are not going to stand about outnumbered 20-to-1 with military men of capability – hands unbound. Nor is there any possible reason, if this were real, to order the men to ‘fake it’ by feigning as if their hands are bound.

The feigning of bound hands proves that this is a scam and that there was no mass slaughter, as acclaimed. They are then marched to their death. Source: AP The criminal clique takes the time to film the entire affair, as if they are making a documentary. Even so, is it not odd that not a single one of these supposed military men was in uniform? Where did they find them, at the soccer field?

Tikrit is a Saddaam-ite enclave. Saddaam Hussein was or, rather, is a clear and categorical Zionist asset, put in power directly by the CIA-Mossad.

Notice the movie-like nature of it all, the men lined up in the shallow ditch, the man at the end with the flag, the men pointing their weapons. Yet, is there not something incredible about this weapon pointing? They are doing so without guarding themselves against the powerful kick of an AK-47. In a shallow ditch, the ISIS fighters fire rounds of bullets at the men. Source: AFP

Once again, it is the Rothschild clique, through its entity, AFP, which is spreading about these photos. There should be much blood in the image above, since, purportedly, brains are being blasted out. There is no such blood in that sandy area. …and after. It’s the same. There was no blood prior to the imagery of the firing of the AK-47s, and there is no blood to be seen afterward. Once again, there should be a mass of blood splattering. Yet, not a drop is seen. Plus, the man takes no precautions from the kick of such a weapon. Moreover, while there is what appears to be dust there is no gun flash seen at any time from the weapons.

This is a Zionist plot, just like the Boko Haram scam, plotting, conceived, and orchestrated by the hate-generating, warmongering, and arch-murderous Zionist cabal.